This month has marked the 10th anniversary of the global financial crisis of 2008 and media raced to discuss the lessons (not) learned. In reality, the only lesson learned is that the largest financial institutions must be bailed out at all costs to keep the current financial system afloat.

Below I review some of the main causes of the 2008 financial crisis and comment on what we have learned in the past 10 years.

Too Big To Fail

In an ideal world, every sector of the economy would be subject to Joseph Schumpeter’s Creative Destruction. Economies improve the lives of citizens when businesses can be readily replaced by more efficient and innovative competitors. Unfortunately, this rule not apply to the financial system today.

Creative destruction cannot happen as long the financial system remains as interconnected as it has been. Just once did regulators in the US attempt to use tough love and punish bankers in 2008. Debating whether or not large banks should be allowed to go bankrupt, Lehman was allowed to declare bankruptcy with no clear plans for its future. This was a miserable failure. The wave of uncertainty in the next few days resulted the need for the largest bailout ever.

The financial system is not just complicated, it is complex. Ultimately, the regulators understood that the complexity of the system means that no stone should be left unturned when saving it. The confusing part of this lesson is that the key regulators in the 2008 financial crisis now argue that some tools they used to save the financial system would no longer be available to them today.

It seems clear that the system would have to change completely before the 2008 tools are taken away from regulators. However, the system has not been changed. Let’s compare the 2007 and 2018 market capitalization of the 10 largest US financial institutions according to S&P 500 Financials sector index: 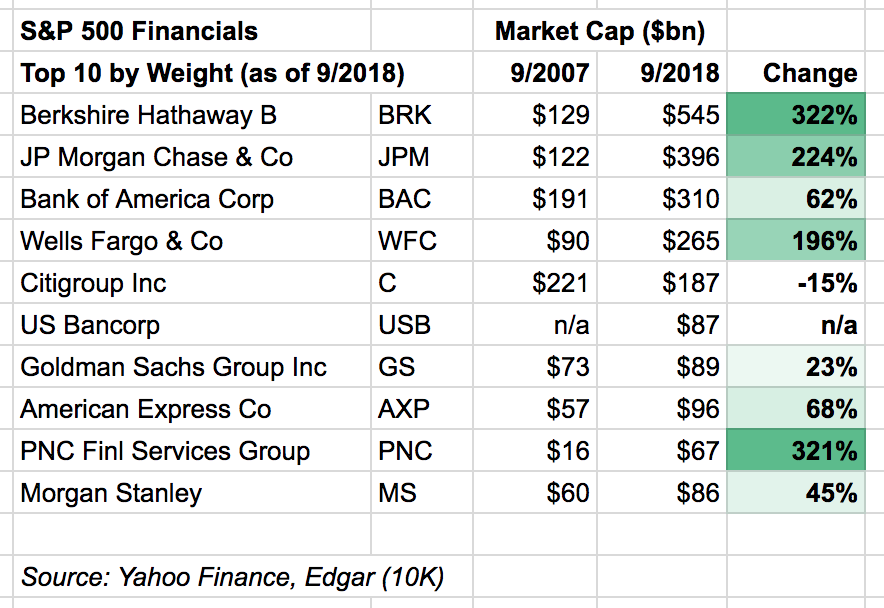 Admittedly, the table is only a very rough estimate of the impact of the largest financial institutions on the economy. Market cap does not directly relate to the impact on the economy but it’s a good rough estimate. Some companies were removed from the index so their impact diminished (Lehman’s market cap in 2007 reached $60bn but today it’s 0). General inflation also causes some of the growth. However, considering the significant growth of the value of these companies from 2007 to 2018, it’s impossible to argue that large financials are less important to the state of the economy today than they were in 2007.

Low interest rates incentivize companies and individuals to borrow (for example in the form of mortgages) which stimulates economic growth. After 9/11, interest rates were lowered to around 1% to stimulate growth and resulted in the excessive, irresponsible borrowing many argue became one of the primary causes of the 2008 financial crisis.

Whether this argument is true is still open to debate. What is not open to debate is that if extremely low interest rate kept for too long are harmful, then we have not learned the lesson.

Mortgage rates reflect general interest rates so rates between 2001–2006 were at historically lowest levels at the time. This led people to borrow too much for properties they couldn’t afford. And that is how the subprime mortgage crisis unfolded. However, mortgage rates have now been lower for over a decade compared to those supposedly causing the crisis. Financial institutions presumably increased lending standards to ensure that only people in good financial standings can borrow. However, even this obvious lesson is now being tested.

Fractional banking means that confidence of the population in the financial system is paramount. It’s not just paramount, it’s the only thing there is.

The public perception is that there were no people made responsible for 2008 crisis. When the music stopped for Enron or later Madoff, people responsible landed jail sentences totaling hundreds of years. However, no such cases took place following the 2008 financial crisis even though many lawsuits were filled.

Moreover, education has not kept up either because some students are concerned that economics is being taught as if no financial crisis happened. Imagine an architect designing a bridge which subsequently falls down but students continue being taught to build the same bridges in schools.

Criminal cases must be decided beyond any reasonable doubt so it is conceivable that the complexity of the financial system means that no people can be made directly responsible for it. However, not changing how we think about and teach economics leads us directly to Albert Einstein:

The definition of insanity is doing the same thing over and over again, but expecting different results